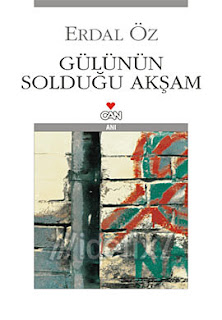 Erdal Öz’s famous novel Gülünün Solduğu Akşam (The Night His Rose Faded) is one of the most controversial works of contemporary Turkish literature largely because of its topic. The book is so important that it is often accepted as a first step for high school students to learn about socialism and socialist movements in Turkey. Erdal Öz is an important Turkish novelist and also owner of a prestigious publishing house (Can Yayınları). He was a political activist during the 1960’s, 1970’s as a defender of socialism and Gülünün Solduğu Akşam is a collection of his memoirs and interviews with some foremost revolutionary figures of the period such as Deniz Gezmiş, Yusuf Aslan and Hüseyin İnan. Öz had chance to make interviews and conversations with these socialist idols while he was serving his time in Mamak Military Prison (Mamak Askeri Cezaevi) in Ankara as a thought criminal in 1971. The writer decided to bring all his notes and memoirs together in the 1980’s and published Gülünün Solduğu Akşam in 1986. He decided to present his memoirs in the format of a novel with his warm and effective style and the book became a best seller and made more than 30 editions in years. The name of the book comes from the famous lines of Turkish poet Turgut Uyar, “Herkes ne zaman ölür, elbet gülünün solduğu akşam (Everybody dies certainly when the night his rose faded)”.

Deniz Gezmiş is the main figure of the novel and Öz first tells us about his capture together with Yusuf Aslan in Gemerek, Sivas. Gezmiş was the leader of socialist revolutionary organization THKO (Türk Halk Kurtuluş Ordusu-Turkish People Liberation Army). Socialist movements in Turkey became powerful especially in the late 1960’s and 1970’s mostly affected by the 1968 generation like in many other countries around the world. However, there was no unification around a definite view and socialist movement was heavily fragmented. TIP (Türkiye İşçi Partisi-Turkish Workers Party) was representing the legal, “revisionist” socialism according to socialist revolutionaries like Deniz Gezmiş. TIP movement was heavily criticized by socialist revolutionary groups who were committed to National Democratic Revolution thesis (Milli Demokratik Devrim-MDD) including THKO (Gezmiş’s group), THKPC (Mahir Çayan’s group), TIIKP (Doğu Perinçek’s group) for making bourgeois revisionism. MDD theorists like Doğan Avcıoğlu and Mihri Belli were claiming that the conditions of Turkey were not convenient for a socialist revolution so, a democratic revolution that would cut Turkey’s ties with imperialist countries and sweep the feudal system should be made first. While young students thought this could be realized by guerilla movements in cities and in villages like Che Guevara, MDD thinkers like Avcıoğlu thought that it was better to make this revolution with the help of TSK (Turkish Armed Forces). Turkey in the 1960’s was a perfect place for a socialist revolution with a liberal constitution (1961 constitution), powerful and enthusiastic student groups totally committed to socialism and economic problems in the country as well as the popularity of 68 generation in the world. Members of THKO were all university students (most of them in METU) and after the 12 March 1971 memorandum the only choice for them was to take to the hills and start a guerilla movement in the countryside. 71 memorandum was able to prohibit all socialist movements and organizations in the country and directed these young people to marginalization and terror.

Öz explains the important events of the early 1970’s as heard directly from the youth leaders Gezmiş, İnan and Aslan. One of the most interesting stories is related to the murder of THKO members in Nurhak mountains in Kahramanmaraş. Hacı Tonak, a member of THKO who participated in Nurhak struggle and was captured by police soldiers, executes agitation-propaganda activities in the villages of Maraş and finally reaches the point that due to their backward production style and land ownership understanding villagers are not appropriate for a socialist revolution. He blames villagers of Nurhak for squealing and causing the death of many young patriotic people including Sinan Cemgil, one of the ideologues of THKO, a charismatic leader of the period and the son of important academician and writer Adnan Cemgil. The book is full of tragicomic stories of young socialist students who were about 15-20 people climbing one mountain to other in Anatolia like a scout group and trying to make revolution which they thought would increase the life standards of Turkish and Kurdish people (they use in this way) and would create a “fully independent and really democratic Turkey (Tam bağımsız ve gerçekten demokratik Türkiye)”. This phrase became one of the slogans of Turkish socialism in the 1970’s.

One of the most dramatic and tragic parts of the book is related to the tortures made to İrfan Uçar, another THKO member. Uçar clearly explains the ugly details of all the methods used by policemen in order to make him confess about THKO and its other members. The methods used by police to make suspects speak are extremely disturbing. The last part of the book is about the last night of Gezmiş, Aslan and İnan before the execution. According to the memoirs of their advocate Halit Çelenk, these three young revolutionaries were the victims of state ideology (not Kemalism but the state’s official rightist ideology in the conditions of Cold War) that envisaged the left-right division as a football match and wanted to equalize the match by killing these three young people as a response to the execution of rightist ex-prime minister Adnan Menderes and two ministers Fatin Rüştü Zorlu and Hasan Polatkan. So, in a sense Turkish state or better Turkish military wanted to compensate a mistake by making another mistake. According to witnesses, three socialist leaders were comfortable before the execution and they were not regretful of what they did. Öz reminds us that although these people engaged in illegal activities like kidnapping three American soldiers and bank robbing, they never killed anyone and surely did not deserve to be executed. Öz also mentions about the difficulties that young political criminals had faced in the prison even before the execution. Military officials were making everything to demoralize these people but Öz states that they were not successful. He also mentions about the difficulties that Gezmiş, İnan and Aslan’s parents had faced after the execution. Their last letters to their parents are also published in the book and sadden the readers heavily.

Although Erdal Öz’s book does not contain any theoretical information about socialism, it is accepted as an important work for Turkish socialists. The book irritates readers because of injustices made against young revolutionaries. It is hard to say that Öz as a socialist wrote this book objectively but he tries to prove his sayings by showing witnesses and references. Öz also mentions that Gezmiş in the prison asked him to write a novel or a memoirs book for themselves in order to teach socialist generations of the future. All their meetings and interviews were planned and Öz was able to save his notes from the prison guards and to unify them after his release with 1974 general amnesty in the country. Öz’s phrases are powerful, sensitive and they address to the sentiments of people rather than reason. His language is also very fluent and the book is a powerful but easy to read work.