Enkidu as Alter-Ego of Gilgamesh 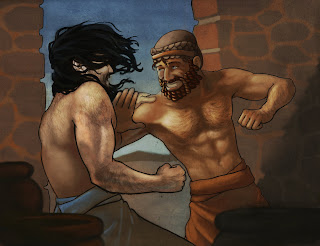 
[1] Definition taken from http://www.dictionary.com
[2] “Then he, Enkidu, offspring of the mountains, who eats grasses with the gazelles, came to drink at the watering hole with the animals…” (The Epic of Gilgamesh, p. 8).
Ozan Örmeci

Erasmus and the Praise of Folly 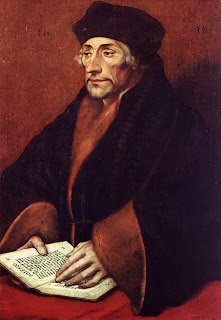 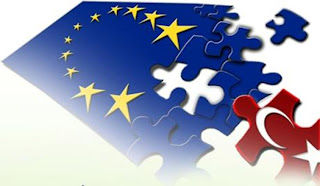 - On 17 December 2004, EU decided to start accession negotiations with Turkey.

- On 3 October 2005, three chapters of the Acquis Communautaire (Right of Establishment for Companies & Freedom to provide Services, Financial Services and Financial Control) were opened.

- On 12 June 2006, chapter on Science and Research was opened and provisionally closed.

- On 11 December 2006, continued dispute over Cyprus incited EU to freeze talks on eight chapters (Right of Establishment for Companies & Freedom to provide Services, Financial Services, Free Movement of Goods, Agriculture & Rural Development, Fisheries, Transport Policy, Customs Union and External Relations) and to state that no chapters would be closed until a resolution is found.

- On 29 March 2007, chapter on Enterprise and Industrial Regulations was opened.

- On 25 June 2007, chapters on Statistics and Financial Control were opened, but the opening of the chapter on Economic and Monetary Policy was blocked by French President Nicholas Sarkozy.

- On 19 December 2007, chapters on Health & Consumer Protection and on Trans-European Transport were opened.

- On 17 June 2008, chapters on Company Law and Intellectual Property Law were opened.

- On 19 December 2008, chapters on Economic & Monetary Policy and Information Society & Media were opened.

Westphalia Treaty: The Fall of Religion and The Rise of Nationalism 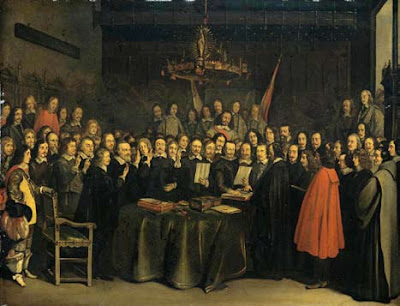 There is no doubt that secularism or laicism is one of the sine qua non conditions of democracy. However, the secularization of the states and nations is not an easy process. In Middle Eastern countries, secularism is still a very problematic issue. On the other hand, European countries were shaken and hundred thousands of European people shed their blood because of religious and sectarian wars. This assignment is an attempt to analyze the birth of Westphalia Peace by focusing on the Reformation movement in Christianity. In order to this, I will first explain shortly the Reformation movement and then I will focus on the Westphalia system. I will lastly combine these two developments in Europe and name their consequences.
The reformation movement began in Europe with the emergence of Martin Luther’s activities (1517) to reform the Catholic Church. In the Middle-Age, the Church became a very corrupt but influential actor. The sale of indulgences and Church positions decreased the legitimacy and the holiness of the Church in the eyes of Christians. Luther, aiming to reform the Church, thus in a sense established a new Christian sect called Protestantism. In Protestantism, Church’s authority was relatively weak and the faith was in conformity with free-trade as it was stated by Max Weber. Luther’s movement was later supported by Jean Calvin and Calvinists, Anglicans and Anabaptists. Soon, the whole Europe was divided into two sects and religious wars began between these groups and especially between different German princedoms. These wars ended in 1648 by the signing of Westphalia Peace Treaty.
Westphalia Peace Treaty refers to a pair of treaties signed between German princedoms and other important European monarchies after the Protestants’ victory in the Thirty Years’ War (1618-1648). By the Westphalia Treaty, each prince was given the right to determine the religion of his state and in a sense Protestantism gained legitimacy. This treaty thus ended the religious wars in Europe and created a convenient situation for modernization and the rise of nationalism. Sovereign states which were the basis of nation-states were established after Westphalia. Moreover, religious tolerance was approved by giving the Church the responsibility to serve other sects in allotted hours. Westphalia’s consequences were not only religious but social and political. Socially, different religious sects were recognized and thus pluralism in Europe began to be developed. Politically, sovereign states were established and the fall of religion prepared Europe for modernization and nationalism. According to Oral Sander, Westphalia Peace constitutes the backbones of modern international system.
When we combine these two major events in European history, we can make these points. First of all, the end of religious and sectarian wars increased the legitimacy of European princedoms and monarchies and thus created a stability situation. Countries having sovereign rights (the right to choose the religion of the state etc.) began to be developed and form their nations. Secondly, in relation with this trend, nationalism and the idea of the nation-state gained enormous emphasis by the Westphalia. By the limitation of the Church’s power and the acceptance of the collapse of Holy Roman Empire, states became sovereign institutions and they established a balance of power between themselves which brought Europe stability and peace. Because of this, Westphalia Peace Treaty led to Westphalia system. This status quo was later changed after the French Revolution and Industrial Revolution but for more than a century it existed without important problems.
Secularization and the establishment of a modern, efficient state is the most important condition nations have to be realized. Nations without having nation-states and secular systems, are doomed to be disappeared as we see in many countries today. However, internationalism, supranationalism and globalization are also the realities of the new century and their effect on nation-state will determine the fate of nation-states in the 21st century.
Ozan Örmeci
Gönderen Ozan Örmeci Makaleleri (Ozan Örmeci Articles) zaman: 13:59 Hiç yorum yok: